GRaPL provides complete control over how songs will be played to accompany whatever performances you may be planning. This page hopes to provide everything you need to know to master both your rehearsals and shows. 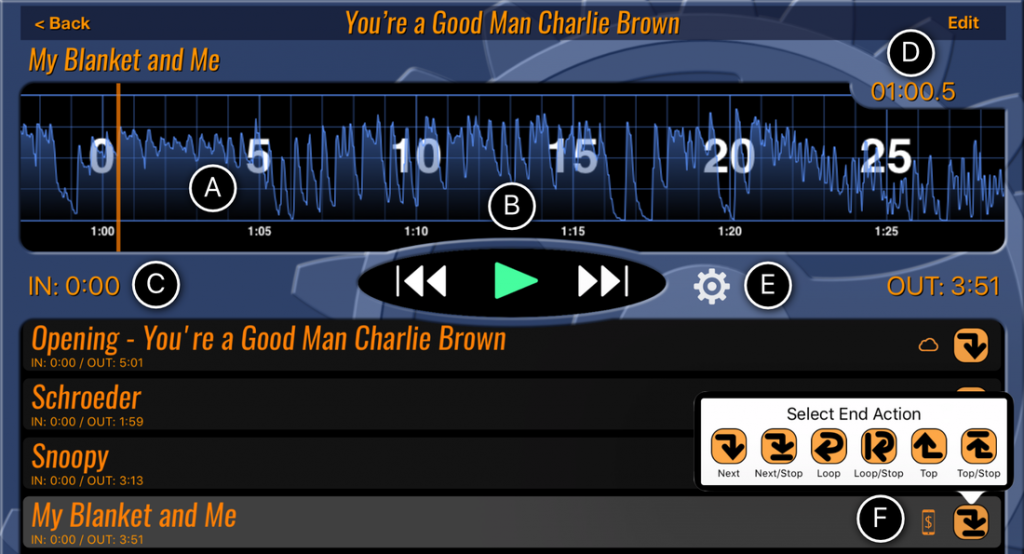 Elements of the Interface

Take a moment to learn the functions of the various parts of the interface.

It’s important to note that waveforms are only available for songs that have been purchased and downloaded to your device.

​When a waveform is not available, the display will look like this. You will still be able to interact and control the song in the same ways but you will not have the added benefit of the waveform to find certain parts of the song.

Once playback begins, the display will begin to scroll in accordance with the current playback time. While a song is playing back, you will not be able to scroll the window until playback stops.

The bright-orange vertical bar represents the current point in the song. Scroll the waveform and grid to that point to specify where to start.

When an “in”-point has been specified, the portion of the song that preceeds that point will be shaded in orange. See section “C” for more information on “in” and “out” points.

The waveform is a graph that shows the volume level at each point in a song. The higher the graph, the louder the song would be. This can be very useful to help find transitions in a song that might be the right place to begin rehearsing. The grid also marks each second and has bold numbers every five seconds. So even if your song is in the cloud, and a waveform is not available, you will still be able to precisely scroll to a specific time in the song. ​

These transport controls behave exactly as you would expect when using a music app.

Press this to play the song. Once the song has started playing this will change to a red box which you can press to stop playback. During playback you will not be able to interact with most interface elements until playback stops – either on its own or by pressing the red stop button

“In” and “Out” points allow you to specify a different place to begin or end playback for a particular song. You may want to do this if the song has a long intro that you’d like to skip or if you are only interested in a particular portion of a song.
​
To set an “In” point, scroll to the part of the song where you’d like it to begin and press on the “IN: x:xx” display. Once you do, the counter will update to reflect the current time code of the song, and the waveform display for the audio prior to that point will be shaded orange.

“Out” points are set in the same way. Press on the “OUT: x:xx” display when you’ve found the right place to end the song. By default, the “In” point for each song is set to “0:00” and the “Out” point is set to the end of the song.

​Now, in version 1.3, it’s possible to specify an amount of time over which to fade the volume of the playback. In the example above, the volume level will begin to fade 7.0 seconds before the end of playback. The display provides visual feedback to give a sense of how the audio will be faded before playback stops.
​ 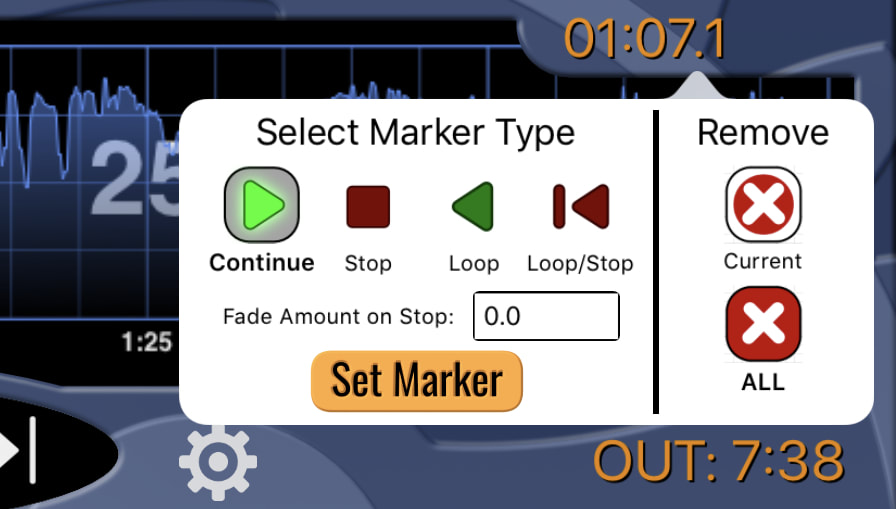 As the song plays, or as you scroll through the song using the waveform display, you will notice the time code display will always show the current playback time code. But you may not know that if you tap on the numbers, you will be able to see the marker control window. Markers were desigined with rehearsing in mind. They allow for an easy way to mark certain sections of a song where you would like

Here are the marker types:

Select this marker type to stop playback at this spot. To continue playback, tap the play button and the song will resume from this spot.

Select this marker type to loop back to a previous marker and continue playing from there. If no previous marker exists, playback will resume from the beginning of the song. The looping will continue until you press the stop button.

You can also remove a marker by moving the playhead exactly to a marker. The easiest way to do this is to use the previous or next transport buttons so that you’re exactly on top of a marker and then select this button.

… or if you’d like to remove all of the markers press this button.

Two of the Marker Types will cause playback to stop – “Stop” and “Loop/Stop”. For these two types, there is an additional parameter: “Fade Amount on Stop”. If you wish for the volume level to fade out prior to stopping, enter the number of seconds over which to fade in the box provided. The default value is “0.0” which represents no fading. 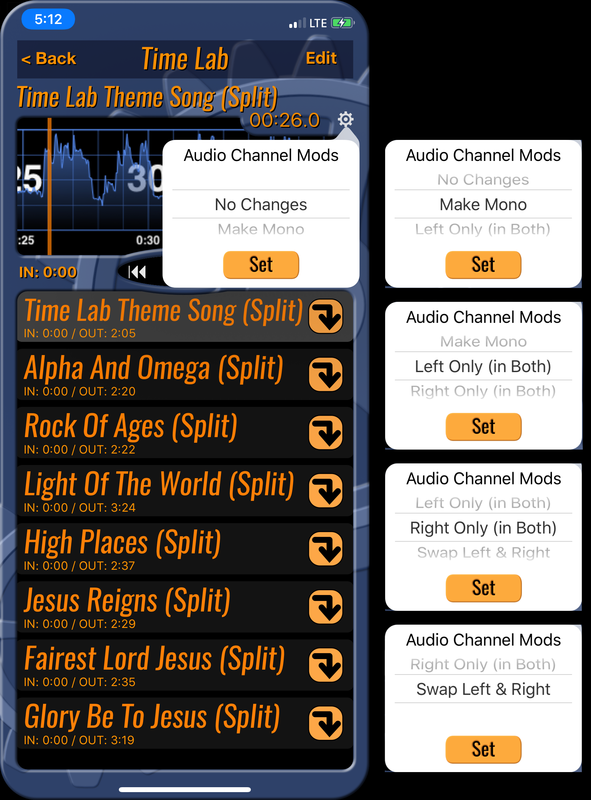 Many performance sound tracks provide split trax where the instrumentals are on one channel and the vocals are on the other channel.

“Channel Mods” allow you to take advantage of these sound tracks by allowing you to choose how you want to combine the channels for your performances.

Make Mono
This option will combine both left and right channels and play them back equally in each channel.  Depending on the sound system in your auditorium, stereo or split track channels can introduce problems.  Choosing this option can often alleviate these problems.

Left Only
This option will take the audio from the left channel and send it to both the left and right channels of your sound system.  Whatever audio is on the right channel will be silent.

Right Only
This option will take the audio from the right channel and send it to both the left and right channels of your sound system.  Whatever audio is on the left channel will be silent. 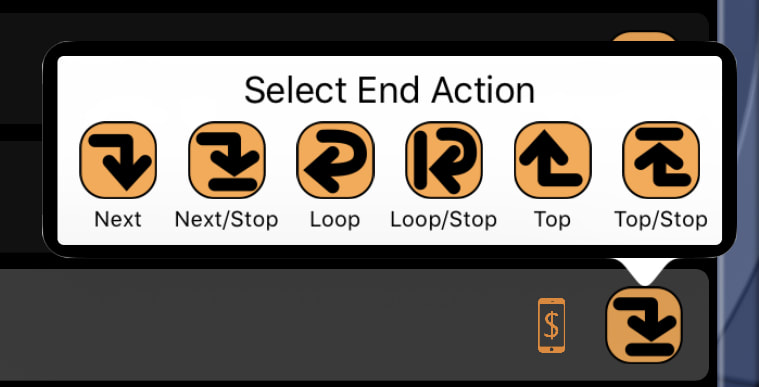 This is the typical behavior of other music players, advance to the next song and continue playing. Sometimes this is exactly what you want.

… however, if you need to give instruction or wait for any reason between songs, this mode will advance to the next song and wait for you to press play to continue.

If you want to repeat a song over and over until you explicitly press stop, select this action.

To return to the beginning of a song and wait, select this action.

To return to the top of the playlist and continue playing, select this action.

To return to the top of the playlist and stop, select this action.